© The Author(s) 2020. Open Access This article is licensed under a Creative Commons Attribution 4.0 International License (https://creativecommons.org/licenses/by/4.0/), which permits unrestricted use, sharing, adaptation, distribution and reproduction in any medium or format, for any purpose, even commercially, as long as you give appropriate credit to the original author(s) and the source, provide a link to the Creative Commons license, and indicate if changes were made.

Contactin associated protein 2 (CASPR2) is cellular adhesion molecule (CAMs) part of the neuroxins family. It is a transmembrane protein with its C-terminal portion interacting with an ankyrin protein called 4.1B and also a PDZ binding motif[1].

It is localized along the axon, especially in the synaptic terminal and in the juxta-paranodal portion in the node of Ranvier. It is found in neurons on the basal ganglia and other motor areas, limbic system, sensitive pathways, and appears richly expressed in the temporal lobe, especially in inhibitory GAD65 positive neurons[1-3]. CASPR2 forms with Contactin-2 part of the VGKC complex, where it has the function of clustering Kv1 channels at the juxta-paranodal[1-3][Figure 1]. 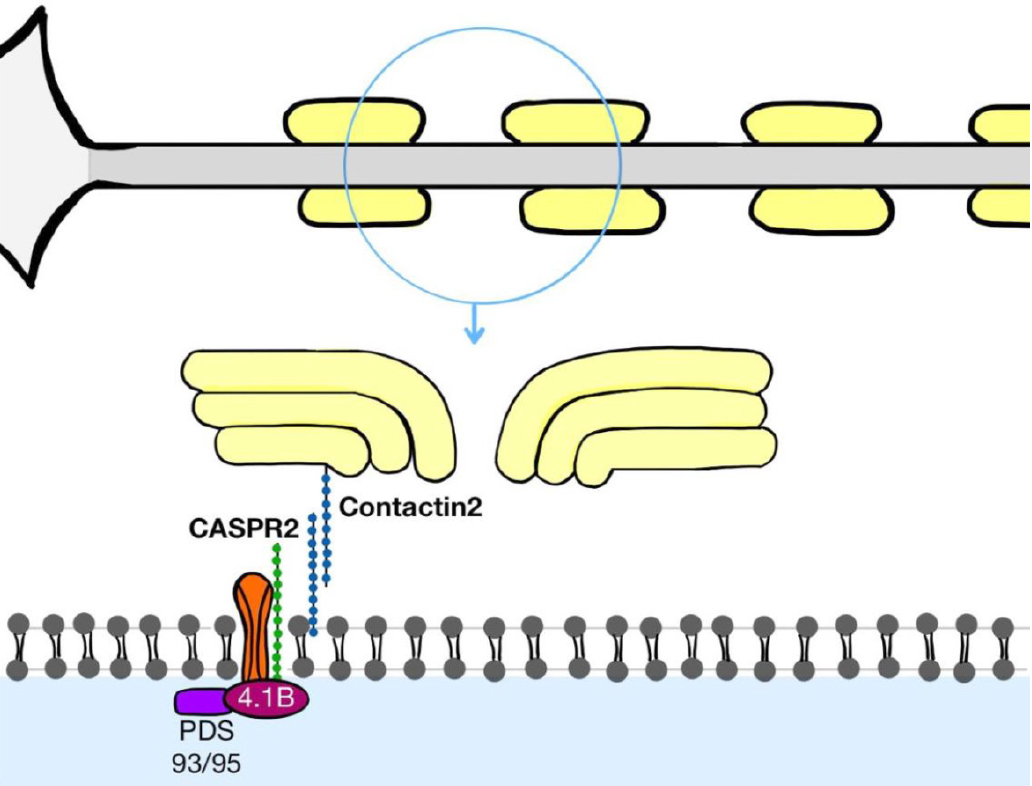 Figure 1. It represents CASPR2 localization at the juxta-paranodal portion in the node of Ranvier, showing its interaction with Contactin-2 forming the voltage gated potassium chanel complex (VGKC complex)

Antibodies against CASPR2 have been described in various forms of clinical presentation[4][Figure 2], part of this great variation is believed to be associated with great variation in epitopes, although antibodies against the discoidin domain and laminin G1 are found in every patient[1,5,6]. As well the overlapping found between peptides of CASPR2 and LGI1 could explain the variation of phenotype when exposure to the same VGKC complex antigens[7,8]. Additionally the HLA DRB1*11:01 implicated in CASPR2 is not associated with LGI1[7]. 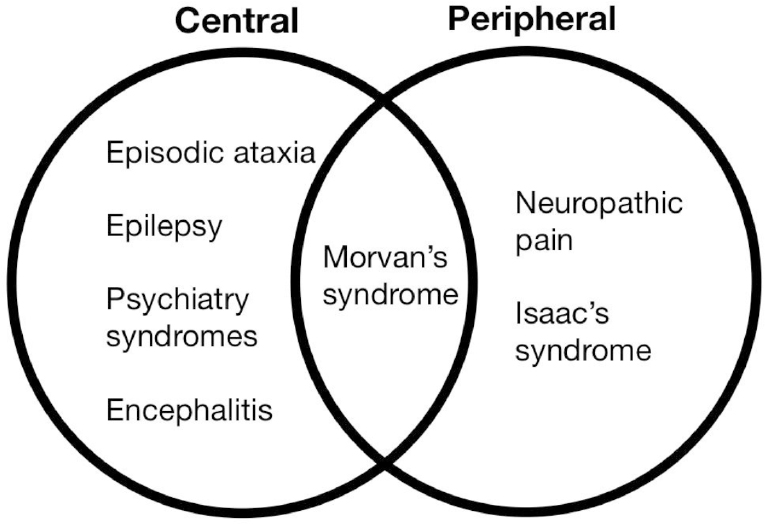 The pathogenesis in anti-CASPR2 disease is believed to occur due to a block on the interaction between CASPR2 and Contactin-2[6,9][Figure 3], and the disrupting the Kv1 channels expression. In some cases, there is reduced expression such as in the dorsal root ganglia[10] and in others inducing an increase in the expression, especially in the inhibitory interneurons in the hippocampus[6,8,9]. This may cause hyperexcitability that could cause epilepsy[8] and network imbalance supported by neuroimaging studies[11].

Figure 3. The IgG4 anti-CASPR2 blocking the interaction between CASPR2 and Contactin 2 protein, without activating complement, but disturbing the expression of the voltage gated potassium channel

The largest study investigating Morvan’s Syndrome included 29 patients[14]. 93% of them were male and the median age was 57, varying from 19 to 80. VGKC-complex antibodies were positive in 79%. Tumor was found in 41% of the patients, and the most prevalent tumor was thymoma in 11 patients, 9 of them had history of acetylcholine receptor antibodies[14].

Most of the patients have both CASPR2 and LGI1 antibodies[4,15], but CASPR2 antibodies titers are usually higher[14]. Antibodies against Contactin-2, a protein expressed in heart conduction tissue, may also be found, associated with cardiovascular instability[14]. There are also some patients whose sera are not consistent with CASPR2, LGI1 or contactin-2, increasing suspicion about an unknown antibody[14,16].

Isaac’s syndrome is an acquired Peripheral Nerve Hyperexcitability that can include myokymia, muscle cramps, fasciculation, twitching, stiffness, and pseudomyotonia (slow relaxation of the muscles after contraction that happens especially in hands, eyes and jaw)[16-18]. Muscle activity persists even when the patient sleeps[18] and it may result in muscle hypertrophy[17], mainly calf muscles[16,17], but also forearm and hand muscles Cramps are often worsened by voluntary muscle contraction[17]. Dysautonomia (hyperhidrosis, sialorrhea), Trousseau and Chvostek sign may also be present; sensory manifestations are infrequent[16], strength and reflexes are usually normal[17]. The symptoms are usually insidious, presenting over years[16].

Antibodies against VGKC complex are found in 38%-50% of the patients. VGKC is associated with repolarization of synaptic membranes[12] and its blockage consequently causes nerve excitability[17]. Other autoimmune disorders including myasthenia gravis, Addison disease, Hashimoto thyroiditis, are associated, such as neoplasms, mainly thymoma[17]. Encephalopathy is not present in Isaac’s syndrome[17].

Limbic encephalitis, or limbic encephalopathy, is a reversible cause of cognitive impairment when correctly diagnosed and early treated[19]. The main symptoms suggest infectious encephalitis[19], but there are many differential diagnosis besides infection: neurodegenerative dementias, Wernicke-Korsakoff syndrome, Hashimoto’s encephalopathy, overdose, schizophrenia and others[4,19]. It affects mostly men over 50 years old and has poor association with tumors[4].

The symptoms include amnesia, confusion, psychiatric features, seizures, sleep disturbance and dysautonomia[4,19-21]. The presentation vary from acute to insidious[4] and may be preceded by neuromyotonia[22]. Focal seizures are the most common type, frequently assuming medial temporal-lobe topography; and generalized seizures are less frequent[4]. Chandra et al.[19] described 12 patients with anti-VGKC encephalitis; all of them had cognitive decline, sleep disturbance and symptoms of panic, 9 had agitation and 3 had faciobrachial dystonic seizures. Catatonia was observed in anti-NMDA related encephalitis, but not in anti-VGKC[19].

Neuropathic pain is frequently found in patients with CASPR 2 antibodies, likely due to CASPR 2 large expression in peripheral nervous system[13].

CASPR2 antibodies were positive in 10% of patients with idiopathic ataxia[13]. Orthostatism and emotions are triggers to episodic ataxia related to anti-CASPR2 antibodies[23].

In conclusion, the great variability of syndromes that can be caused by anti-CASPR2 antibodies, despite its rarity, should be remembered in clinical practice as a differential diagnosis of diseases like limbic encephalitis, epilepsy especially in older patients, new onset psychiatry symptoms, neuropathic pain, idiopathic ataxia, because the immunotherapy has been associated with improved outcomes in patients.

Performed data acquisition and data analysis as well helping with the writing in the text: Breis LC, Schlindwein MAM

Made substancial contribuitions to conception and design of the study, as well as provided technical support: Gonçalves MVM

Availability of data and material 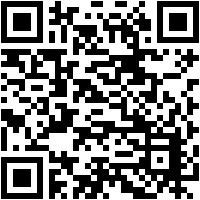