Paraneoplastic limbic encephalitis (PLE) is a rare immunopathological syndrome, reported in association with certain types of malignancies. Patients present with cognitive and memory impairments, disordered perception, mood and behavioral changes, sleep disturbances, and seizures. Despite the growing number of cases being reported, it still poses a diagnostic challenge. We encountered a patient with a myriad of neuropsychiatric symptoms who exhibited a highly variable response to therapy. A 36-year-old male presented with memory impairment, excessive sleepiness, and slurred speech. Brain magnetic resonance imaging revealed hyperintensities in the temporal lobes and hypothalamus, all suggestive of limbic encephalitis. He was found to have a mixed germ cell testicular teratoma. Screening for commonly associated antibodies did not yield positive results, which emphasizes that sero-negative PLE can be missed in patients with malignancies. In reporting this case, we urge neurologists to consider PLE as part of the differential diagnosis in similar ambiguous clinical scenarios.

Paraneoplastic limbic encephalitis (PLE) is a rare syndrome characterized by confusion of acute onset, mood changes, hallucinations, loss of short term memory, and seizures[1]. The pathogenesis is not fully understood but is thought to be due to autoimmune cross reactivity.

The aim is to guide neurologists to recognize the clinical manifestations of neurologic paraneoplastic disorders, more specifically the PLE subtype, and to distinguish them from other causes of neurologic dysfunction in cancer patients. Early diagnosis of paraneoplastic syndromes can maximize the likelihood of favorable oncologic and neurologic outcome[2].

A 36-year-old right-handed Saudi male, with a medical history of hypertension and liver transplantation in 1995 maintained on tacrolimus, presented to the emergency department with a complaint of progressive impairment in recent memory, excessive sleepiness, slurred speech, and depression for 3 weeks with an increase in severity over the past few days. Neurologic examination revealed unbalanced gait but otherwise motor and sensory functions were within normal limits. There was no history of abnormal movement, tongue biting, headache, neck pain or nuchal rigidity, fever, visual disturbances, weakness, sensory deficits, sphincter dysfunction, or head trauma. In addition, there was no history of smoking, alcohol, or drug abuse.

On examination, the patient was vitally stable with a blood pressure 153/68 mmHg and oxygen saturation 100% on room air, and afebrile. He was conscious, alert, inattentive, and disoriented to time and place. His Glasgow Coma Scale was 14/15. His pupils were 2 mm in size, with a sluggish reaction to light and vertical gaze palsy. Mini mental state examination showed moderate cognitive impairment of 10.

Extensive biochemical, hematological, and radiological investigations were carried out. The basic laboratory tests were not suggestive of any extracranial or infectious causes. Tumor markers screened included alpha-fetoprotein 229 ng/mL which was markedly elevated. However, beta-human chronic gonadotropin and carcinoembryonic antigen were of normal levels.

On admission, the patient was started on IV methylprednisolone (1 g/day for 5 days), and acyclovir (1.2 g for 1 day) until herpes encephalitis was ruled out. His level of consciousness improved with the administration of steroids. However, he became agitated and developed visual hallucinations. These symptoms were managed using haloperidol 2.5 mg intravenous and risperidone 0.5 mg orally.

With this clinical picture, paraneoplastic syndrome was in the top differentials and we sought to rule out common cancers via investigating for tumor markers and imaging. CTs of the chest and abdomen, in addition to renal, abdominal, and testicular ultrasounds were done. Testicular ultrasounds [Figure 2] revealed a well-defined heterogeneous focal mass with cystic changes and micro-calcification in the left testicle. The mass measured 5 cm by 2.7 cm in size. Pan-CT was performed pre- and post-contrast using a triphasic study, and the scan showed multiple retroperitoneal lymph nodes that are most likely related to the testicular tumor, with no suggestion of thoracic or abdominal metastasis. 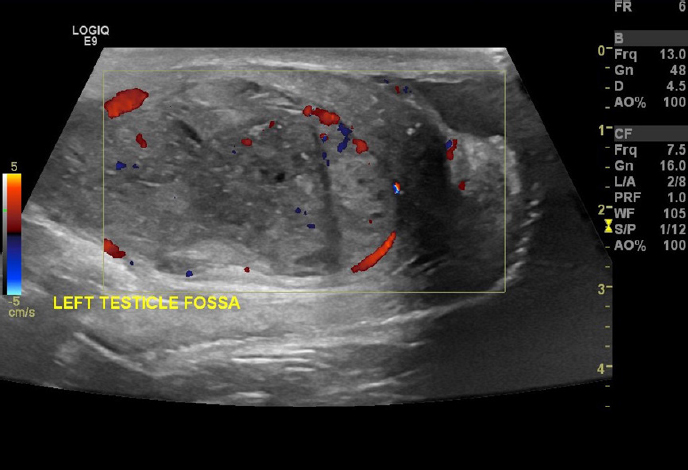 Due to his neurological state at the time, our patient was deemed an unfit candidate for chemotherapy, and tumor resection was the mainstay approach for treating the cancer. Left radical inguinal orchiectomy was done and revealed the mass to be a mixed germ cell tumor constituting yolk sac tumor 90% [Figure 3] and teratoma 10% [Figure 4]. The resection was intended to treat the cancer itself and halt the source of the neurological symptoms. 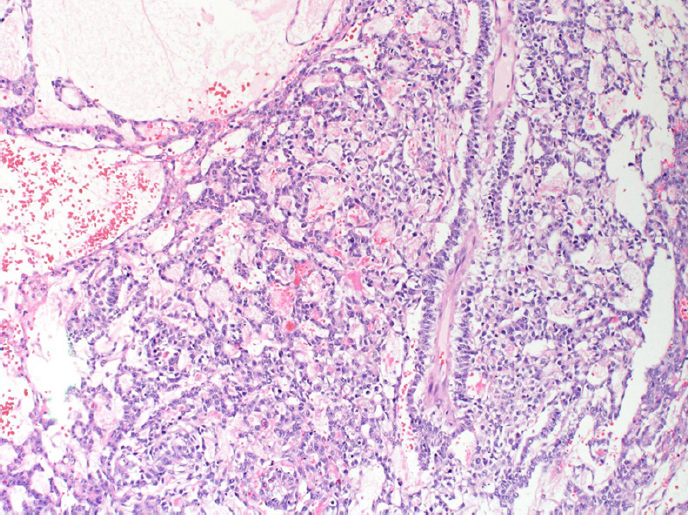 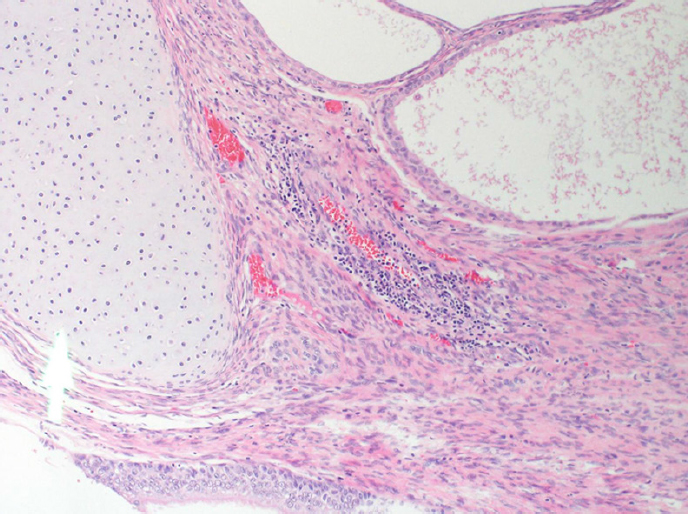 The oncology team decided against adjuvant chemotherapy after the resection, and were reassured by the regression in lymph node sizes. His level of consciousness improved and his speech became more clear. However, there was no improvement in his memory, orientation, or gaze. In the following days, he returned to his baseline status upon presentation where he experienced excessive sleepiness and more visual hallucinations. The patient underwent multiple sessions of pulse steroid therapy, intravenous immunoglobulin (IVIG) and rituximab but there was no clinical improvement. Moreover, the patient started to develop seizures after the initial IVIG session and was then switched to rituximab. The seizures were slow with no epileptiform discharges, and despite the change in treatment they recurred frequently.

In the subsequent months, our patient continued to deteriorate in terms of level of consciousness and respiratory function. He was admitted to the intensive care unit (ICU) where he later became dependent on mechanical ventilation. During his stay in the ICU, he developed multiple septic shocks due to his impaired immunity from tacrolimus as an attempt to prevent liver transplant rejection and unfortunately later went into multi-organ failure. He passed away from cardiac arrest.

Limbic encephalitis has been first described as a paraneoplastic syndrome by Corsellis et al.[3] in 1968. Considered to be a rare association of common malignancies, such as small cell lung cancer, testicular and ovarian cancers[4], Hodgkin’s lymphoma, thymoma, and teratomas[5]. The incidence depends on the type of associated cancer; with the lowest incidence of 8% attributed to testicular cancer, as described by Gultekin et al.[1]. This incidence is expected to increase with the development of new diagnostic methods and treatment modalities, which will lead to prolonged survival of cancer patients and hence increase the number of diagnosis of such cases.

Neurologic paraneoplastic disorders are believed to result from an immune cross-reactivity between the tumor cells and components of the nervous system[6] PLE has been associated with auto-antibodies produced against neuronal cell surfaces and synaptic bodies, expressed in nervous tissue and tumors[7,8]. Their presence indicates an underlying tumor and often allows early detection of the associated tumor, thus aiding the diagnosis. However, these antibodies are detected in only 60% of patients diagnosed with PLE[9]. Commonly encountered antibodies include anti-NMDA, anti-Ma2, anti-Hu, anti-Ta, anti-LG1, anti-CASPR2 and anti-VGKC[8].

PLE is a spectrum of heterogeneous neuropsychiatric manifestations, described as a result of the inflammation of the limbic system. The constellation of symptoms include acute or subacute mental confusion, impairment of recent memory, cognitive dysfunction, hallucinations, depression, personality changes, complex partial seizures and sleep disturbances[10]. Hyperthermia, somnolence, and endocrine abnormalities may also occur as a result of hypothalamic involvement[4]. Although the inflammation is localized to the limbic system, Newman et al.[8] explains the clinical and pathologic findings are not confined to these anatomical areas, and symptoms of brainstem and cerebellar dysfunctions commonly occur, as exhibited by the unbalanced gait of our patient.

The non-specific nature of neuropsychiatric manifestations often precedes the detection of cancer in 80% of patients[11], presents a diagnostic challenge. In addition, its mimicry of other presentations such as viral encephalomyelitis or rapidly progressive neurodegenerative disease, broaden the differential diagnosis[2]. Therefore, tumor screening via imaging and electroencephalography (EEG) is paramount when unexplained paraneoplastic neurologic symptoms are encountered. This uncovered the masked diagnosis of testicular mixed germ cell tumor in our patient, despite the unrevealing results of auto-antibodies.

Although imaging results are often nonspecific, MRI with T2/FLAIR remains the most sensitive tool to diagnose PLE. Medial temporal lobe hyperintensities are seen with infrequent contrast enhancement[4]. EEG supports the diagnosis by showing focal or generalized slowing and/or epileptiform activity, also maximal in the temporal regions. It is useful for determining alterations in consciousness due to postictal states or partial complex seizures[5].

Diagnostic dependence on antibody testing and immunotherapy response might delay proper detection according to Graus et al.[7], since several antibody tests may not be widely available in facilities. These tests require a long duration to produce results, and interestingly, the absence of the antibodies does not exclude the diagnosis and vice versa[6,7].

Lancaster[2] argues the use of response to immunotherapy as an indicator of the diagnosis can also be misleading as some patients may require intensive treatments not available in all centers or may not respond at all. Moreover, patients with other diagnoses may show clinical improvement. The growing consensus advises to start empiric immunotherapy before antibody testing in suspected autoimmune encephalitis[7].

Given the novelty and variation in responses, definitive treatment is not yet available. Early diagnosis aids in the eradication of the underlying cause and antigen source, and in turn provides the highest chance of neurological improvement, with the best prognosis. Suppression of this overactive immune response is also a cornerstone in treatment; achieved by an array of medical modalities, including steroids, cyclophosphamide, IVIG, and plasma exchange[8].

Despite the successful eradication of the tumor in our patient, neurologic improvement was not guaranteed because the causative agents were not produced by the tumor cells, and the possible permanent damage accrued by the immune response. This emphasizes that all efforts should be extended in finding the hidden neoplasm to initiate early treatment and potentially controlling this disease.

IRB approval from the hospital and a written informed consent were obtained. 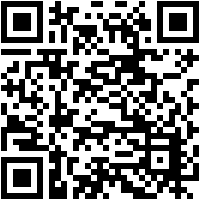