Imaging and cytological analysis of 92 patients with Japanese encephalitis

Results: Prominent involvement in the hippocampus was observed in 10 patients on neuroimaging, in addition to classic involvement in the thalamus and basal ganglia. Lumbar puncture pressure was normal in 61 CSF samples. White cell count increased in 81.19% of CSF samples, 67.65% and 83.33% of CSF samples demonstrated normal chloride and glucose concentrations, respectively, and 82.52% of CSF samples demonstrated > 0.4 g/L protein content. JE patients demonstrate mixed-cell reaction on cerebrospinal fluid cytology in the early phase, which subsequently mainly develop as mainly lymphocyte reaction or typical lymphocyte reaction.

Conclusion: JE imaging is characterized by bilateral thalamic involvement, and the basal ganglia and hippocampus are also commonly affected. The mixed-cell reaction in JE lasts longer than in general viral encephalitis. This may facilitate the differential diagnosis of JE.

Japanese encephalitis (JE), which is caused by infection with the JE virus (JEV), is one of the most important viral encephalitis in the world, especially in East and Southeast Asia. Approximately 35,000-50,000 people develop JE each year, demonstrating annual mortality of 10,000-15,000.[1-3] About one-third of patients die, and half of all survivors develop severe sequelae.[4-6] JE is characterized by high fever, conscious disturbance, seizures, focal neurological deficit, signs of meningeal irritation, etc. JE is regarded as a pediatric disease in endemic areas. The morbidity of JE has substantially decreased due to the wide application of the JE vaccine, though outbreaks still occur in some districts and the number of adult infections is increasing.[7] Bilateral thalamic lesions developed in endemic areas during susceptible seasons should be considered as encephalitis. Cytological analysis of the cerebrospinal fluid (CSF) may reflect the clinical course of JE. Here, we analyze the radiological and cytological features of JE.

Sixty-five patients received MRI of head within 2-32 days after onset. Lesions appeared hyperintense on fluid attenuated inversion recovery (FLAIR) and T2-weighted images, and isointense to slightly hypointense on T1-weighted images. MRI showed no lesions in 16 patients (24.62%) within 2-22 days after onset. MRI findings of 30 patients with clear inflammatory focus included varying degrees of thalamic lesions except two patients. MRI lesions were also noted in the basal ganglia in 11 patients, mid-brain and hippocampus in 10 patients, pons in 1 patient, and cerebral cortex in 5 patients [Table 1].

Lesions can also be observed in the substantia nigra, brain stem, cerebellum, cerebral cortex, and white matter.[8-10] One study reported changes in the thalamus (94%), basal ganglia (35.5%), midbrain (58%), cerebellum (25.8%), pons (19%), and cerebral cortex (19%) on MRI.[8] MRI lesions are generally hypointense on T1 and hyperintense on T2 and FLAIR images. FLAIR is the most useful sequence for detecting lesions and defining the extent of supratentorial lesions. On FLAIR images, cerebral lesions can be better observed, but T2-weighted imaging is better for evaluating the midbrain and brain stem.[11] Thalamic lesions may demonstrate mixed intensity on T1 and T2 imaging in the subacute phase, which may be suggestive of hemorrhagic changes.[12] The involvement of temporal lobe has also been observed in some studies,[8,13,14] but all reported patients also demonstrated involvement of the thalamus and substantia nigra.[14] Temporal lobe involvement is fairly characteristic and mostly involves the hippocampus, usually sparing the rest of the temporal lobe. Because JEV takes a hematogenous route during the invasion and infects the blood supply in parts of the thalamus, cerebral peduncles, hippocampus, and uncus,[14] this may explain concurrent involvement in the medial temporal lobe along with the thalami and substantia nigra. The hippocampal involvement was most commonly in the tail and body, occasionally in the head and amygdala.[14,15] The presence of typical JE lesions in the thalami, substantia nigra, and basal ganglia, along with temporal lobe involvement, may help differentiate JE from herpes simplex virus encephalitis (HSE). Sawlani[11] has reported that MRI techniques such as FLAIR and diffusion weighted imaging (DWI) can be used to evaluate HSE and JE. DWI and apparent diffusion coefficients mapping (ADC) can differentiate cytotoxic edema from vasogenic edema.[16] Significantly restricted diffusion and low average ADC values have been observed in the acute phase lesions in HSE patients, whereas JE lesions do not show restricted diffusion or significantly low ADC values in the acute phase (whereas chronic phase lesions show restricted diffusion and high ADC values).[11] However, Prakash et al.[17] have reported restricted diffusion and low ADC values in the acute phase JE. Coinfection of neurocysticercosis (NCC) and JE has also been observed by MRI and CT, which may result in poor clinical outcomes.[13,18] A significantly higher proportion of abnormal CT scans and abnormal MRI has been reported when evaluating NCC/JE-coinfected lesions.[18] JE in association with cerebral venous sinus thrombosis has also been reported with the help of MRI and MR venography.[19]

In this study, 65 patients took MRI examination in 92 patients. Thirty patients (46.15%) presented with inflammatory lesions between 2 and 32 days after onset, 3 patients (10.00%) presented in the initial phase, 19 patients (63.63%) in the acute phase, and 8 patients (26.67%) in convalescence. Handique[15] has reported 90.00% MRI sensitivity during the 1st week of JE infection. However, in this study, 13 of 30 (43.33%) patients presented with lesions on MRI during the 1st week of JE infection. Our patients were first treated at other hospitals, and some patients were too ill for early examination, so their MRI examinations were not timely, which may explain the low sensitivity in this study.

However, this study does show changes in the thalamus (93.33%), basal ganglia (36.67%), hippocampus (33.33%), mid-brain (33.33%), pons (3.33%), and cerebral cortex (16.67%) on MRI [Figure 1]. Except for one patient, all patients demonstrated hippocampal involvement on MRI that was accompanied by thalami involvement. The gray matter areas of the brain, including the thalamus and hippocampus, were primarily affected by JEV on autopsy.[20] These areas are associated with increases in activated and phagocytic microglia.[21] Srivastava et al.[22] have reported that JEV RNA load in different brain regions of rat with higher affinity of JEV to thalamus and mid brain compared to other regions. These may explain the commonly affected areas observed on imaging. Three patients were examined using both CT and MRI, but only MRI revealed lesions. One MRI reexamination reported lesion reduction following treatment, while another reported enlarged lesions. That may be the first study that used early MRI examination and did not observe the peak of brain injury. Three patients showed inflammatory lesions in combination with ischemic infarction on MRI. All of these patients demonstrated risk factors that are also shared with severe encephalitis, such as hypertension and age. Basumatary et al.[4] have reported that changes on MRI or CT in combination with thalamic involvement are significantly related with dystonia. However, other clinical symptoms, such as behavioral abnormalities, seizure, coma level, and death, do not demonstrate a significant correlation with radiological abnormalities. 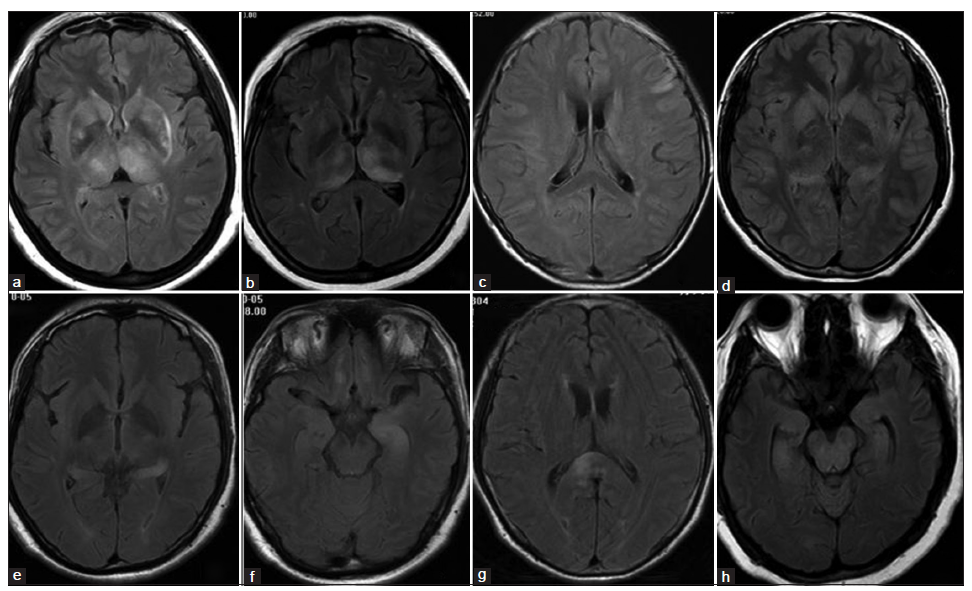 We did not observe NCC and JE coinfection in this study, but there was a forty-year-old woman who got JE associated with cerebral venous sinus thrombosis. The MRI displayed the swelling of the left frontal, parietal lobes and the right occipital with hypointense on T1 and hyperintense on T2 and FLAIR images. The superior sagittal sinus, left sigmoid sinus and transverse sinus filling defect were observed, indicating venous thrombosis. MRV scan further demonstrated thrombosis in the superior sagittal sinus, left sigmoid sinus and transverse sinus, confirming the diagnosis of CVST. Twenty-six patients presented with dystonia, including 16 patients (61.54%) who demonstrated MRI changes with thalamic involvement. Another 16 JE patients did not show lesions on MRI within 6-22 days after onset. This may indicate that thalamic abnormalities suggest JE, but absence does not exclude it. In additional, 11 of 30 patients with MRI abnormalities also received DWI examinations, and 9 of these patients demonstrated lesions with abnormal signals on both T2-weighted imaging and DWI within 5-12 days (mean = 5.9 days) after onset. Due to the decrease in the vasculitis component and perivascular cuffing, the proportion of diffusion restriction decreased and ADC began to rise in the late-acute and early-subacute phases.[17] In this phase, cytotoxic edema is accompanied by the vasogenic collection of fluid that allows the lesion to become visible on both T2W and DWI.

CSF parameters may change in JE patients when the brain tissues or meninges are involved. To summarize, lumbar puncture pressure was normal or slightly increased in most patients. White blood cell count and protein content increased slightly, similar to related reports,[23,24] while the glucose and chloride content were normal in most JE patients. This increase in protein reflects the increase of endothelial cell permeability, which indicates that the blood-brain barrier is damaged in JE patients. The cytological features of CSF are associated with the clinical course of JE, and performance varies in different phases of disease. We analyzed 108 CSF samples and observed the mixed-cell reaction in the early phase of JE. Neutrophils were the major inflammatory cells (mean = 35.67%), though neutrophil predominance is not uncommon in other viral central nervous system infections.[25] We also identified activated monocytes and plasma cells during the disease course. In the acute phase of JE, the proportion of neutrophils dramatically declined to 5.82%, while lymphocytes significantly increased. Monocytes and activated monocytes gradually decreased, but plasma cells peaked. At convalescence, mainly lymphocyte reaction or typical lymphocyte reaction were observed on CSF cytological examination. Neutrophils, monocytes, activated monocytes, and plasma cells all rapidly decreased or even disappeared [Figure 2]. In addition to typical cytological characteristics of viral encephalitis, CSF cytological examination of JE patients also showed that the mixed-cell reaction existed for long periods of time, and we observed neutrophils existed for longer than one week. The rates of neutrophils decrease and lymphocyte increase are fast during treatment, and this may facilitate the differential diagnosis of JE. Misra and Kalita[26] have reported that the 3-month clinical outcomes were not significantly related to CSF abnormalities. Further studies are required. 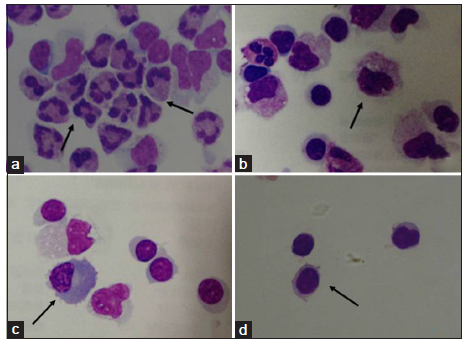 Based on the results of routine biochemical examinations of CSF, white blood cell and protein content slightly increased while glucose and chloride content remained normal in most JE patients. The mixed-cell reaction was noted in the early phase of JE and existed longer than in general viral encephalitis. At convalescence, cytological examinations of CSF demonstrated mainly lymphocyte reaction or typical lymphocyte reaction. The mixed-cell reaction in JE lasts longer than in general viral encephalitis. JE imaging is characterized by bilateral thalamic involvement, and involvement of the basal ganglia and hippocampus are also common.

In endemic areas and epidemic season, the patients considered as CNS infection with bilateral thalamic involvement should be highly suspected as JE.

The center doe disease control and prevention in Hebei province. 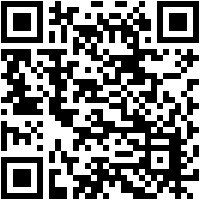