This article belongs to the Special Issue Human Exposure to Trace Contaminants via the Dermal Pathway
Views:362 | Downloads:53 | Cited:

© The Author(s) 2023. Open Access This article is licensed under a Creative Commons Attribution 4.0 International License (https://creativecommons.org/licenses/by/4.0/), which permits unrestricted use, sharing, adaptation, distribution and reproduction in any medium or format, for any purpose, even commercially, as long as you give appropriate credit to the original author(s) and the source, provide a link to the Creative Commons license, and indicate if changes were made. Brominated flame retardants (BFRs) are widely used as additives for a wide range of products, including textiles, electronics, furniture, appliances, and interior decoration materials, to reduce their flammability[1,2]. BFRs include polybrominated diphenyl ethers (PBDEs), of which several compounds, including penta-bromodiphenyl ether (penta-BDE), octa-bromodiphenyl ether (octa-BDE), and decabromodiphenyl ether (deca-BDE), are specifically listed in the Stockholm Convention and have been banned, because of their high persistence, bioaccumulation ability, and long-range transport potential[3]. As PBDEs have been phased out, novel brominated flame retardants (NBFRs)[2,4], such as decabromodiphenyl ethane (DBDPE), bis tetrabromophthalate (BEHTBP) and 1, 2-bis (2,4,6-tribromophenoxy) ethane (BTBPE)[5], are increasingly produced and used as alternatives. However, as the properties of some NBFRs and persistent organic pollutants (POPs) may be similar[6], NBFRs are now attracting concern because of the potential risks they pose to the environment and human health.

Air pollution has emerged as a serious environmental issue in recent decades[7,8], and is the cause of much concern for both scientists and the general public[9-11], because of the risks to human health from exposure to large discharges of particulate matter (containing heavy metals and polyaromatic hydrocarbons), SO2 and NOx. Publics have recognised that abundant airborne particles during heavy haze days increased the risks of inhalation exposure. However, recent studies have reported that the risks to health from several semi-volatile organic compounds (SVOCs) were greater during light haze days than during heavy haze days, because of dermal intake[12-14], and we believe that this new finding deserves further research.

Inhalation has long been recognized as the main exposure pathway for atmospheric BFRs and other SVOCs[18-22]. In recent years, in-depth studies of dermal exposure to BFRs have shown that a considerable proportion of the total atmospheric BFRs taken up by humans could permeate into the human body via dermal exposure[23-26]. It was recognized that BFRs in the particle and gas phases could enter the human body in different proportions, and that the amounts would vary by chemical, particularly for dermal absorption/permeation[27,28]. Therefore, in the light of these recent findings, it would be useful to determine how human exposure to, and the inhalation and dermal intakes of, atmospheric BFRs are affected by the weather and air quality.

In recent years, Harbin, a megacity in Northeast China, has experienced severe and continuous haze conditions in winter, which has had serious impacts on the social economy, ecological environment, and human health[29,30]. The temperature in Harbin can range from below -30 °C in winter to > 35 °C in summer, so Harbin provides an ideal research area to study how the weather and air quality influence human exposure to atmospheric BFRs. We collected gaseous and particle samples in August 2017, December 2017, and from December 2017 to January 2018 in different weather conditions, namely clear days in summer, clear days in winter, and haze days in winter, and analyzed them for 8 PBDEs and 8 NBFRs. We then the atmospheric levels of BFRs in the different seasons with different air quality conditions; the phase distribution of atmospheric BFRs in different seasons and different air quality conditions; and how the temperature and air quality affected human exposure to atmospheric BFRs.

The sampling site was at an elevation of 15 m above the ground, on the roof of the School of Environment at the Second Campus of Harbin Institute of Technology, Harbin, Heilongjiang Province, China. During the sampling period, the temperatures ranged from -24 to 30 °C. The sampling period was divided into three weather conditions, defined as clear days in summer (August 2017), clear days in winter (December 2017), and haze days in winter (from December 2017 to January 2018). Detailed information about each sample is provided in Supplementary Table 1.

The instrument detection limits (IDLs) were calculated using a three-times signal-to-noise ratio. Of the eight PBDEs, the IDL was highest for BDE-209 (0.15 ng/mL), and the IDLs of the other seven PBDEs ranged from 0.01 to 0.03 ng/mL. The IDL of DBDPE was 0.07 ng/mL, and the IDLs of the other seven NBFRs were lower than 0.01 ng/mL. C13BDE-209, BDE-71 and OCN were spiked into each sample as surrogate standards before extraction. Two pairs of field blanks (1 GFF + 1 PUF) and two pairs of experimental blanks were set for each weather type, where no individuals exceeded their corresponding IDL in any of the blanks. The eight PBDE individuals and eight NBFR individuals were all detected in the GFFs samples. In the PUF samples, BDE-138, BEHTBP, and DBDPE were detected at rates of 93%, 87%, and 87%, respectively, and the other BFR individuals had detection rates of 100%.

The G/P partitioning quotient (KP) of SVOCs was defined as[16]:

where CP and Cg (both in pg/m3 of air) were the concentrations of the BFRs in the particle phase and gas phase, respectively, and TSP was the concentration of the total suspended particles (μg m-3 air) in air.

The Harner-Bidleman model (KPE) is frequently used to predict the G/P partitioning quotients of SVOCs in a state of equilibrium, and is calculated as[15]:

where fOM is the fraction of organic matter and TSP was assumed as 0.1. KOA was the octanol-air partitioning coefficient, which was a function of the ambient temperature (T, unit K):

where A and B were the Clausius-Clapeyron coefficients and the detailed values of A and B for eight PBDE and eight NBFR individuals are listed in Supplementary Table 2.

where C was 5 for urban sites.

The daily inhalation intake of gaseous BFRs [DIg, pg/(kg·day)] in the atmosphere was calculated

The daily inhalation intake of particulate BFRs (DIP) was calculated as[34]:

The dermal intake of gaseous and particle BFRs were estimated from the transdermal permeability coefficients kp-g and kp-d, respectively, using the equations derived from the model described by Weschler and Nazaroff[35], as follows:

Here, Kp-cw (cm/h) was the permeability coefficient that describes the transfer of the BFR compound through the stratum corneum with water as the medium that comes into contact with the skin, KOW (unitless) was the octanol-water partition coefficient of the BFR compound, and MW (g/mol) was the molecular weight of the corresponding compound. R (8.314 Pa m3/K/mol) was the ideal gas constant, T (305 K) was the skin temperature, and H [mol/(Pa m3)] was the Henry’s law constant. Vd(g) and Vd(p) (m/h) were the mass-transfer coefficients that describe the BFR compound from the gas and particle phases through the boundary layer adjacent to the skin, and were 6 and 1 m/h, respectively. The detailed parameters for each chemical are shown in Supplementary Table 2.

where SA (m2) is the surface area of human skin, and f is the proportion of human skin exposed to air (only considering the head and hands, SA × f = 0.2 m2)[36]. ET is the daily exposure time (assumed to be 8 h/day in the outdoor environment). kp-g and kp-d (m/h) are the permeability coefficients of gaseous BFRs and particle BFRs, respectively, and are calculated with Equations 9 and 10. Data related to the human body were obtained from other studies[33].

The levels of Σ16BFRs (gas phase + particle phase) were higher on clear days in summer than on clear days in winter, which may indicate volatile BFRs sourced from their added substances (see Figure 1). Furthermore, the high levels of BFRs in the atmosphere during haze days reflect the higher amounts of airborne particles. 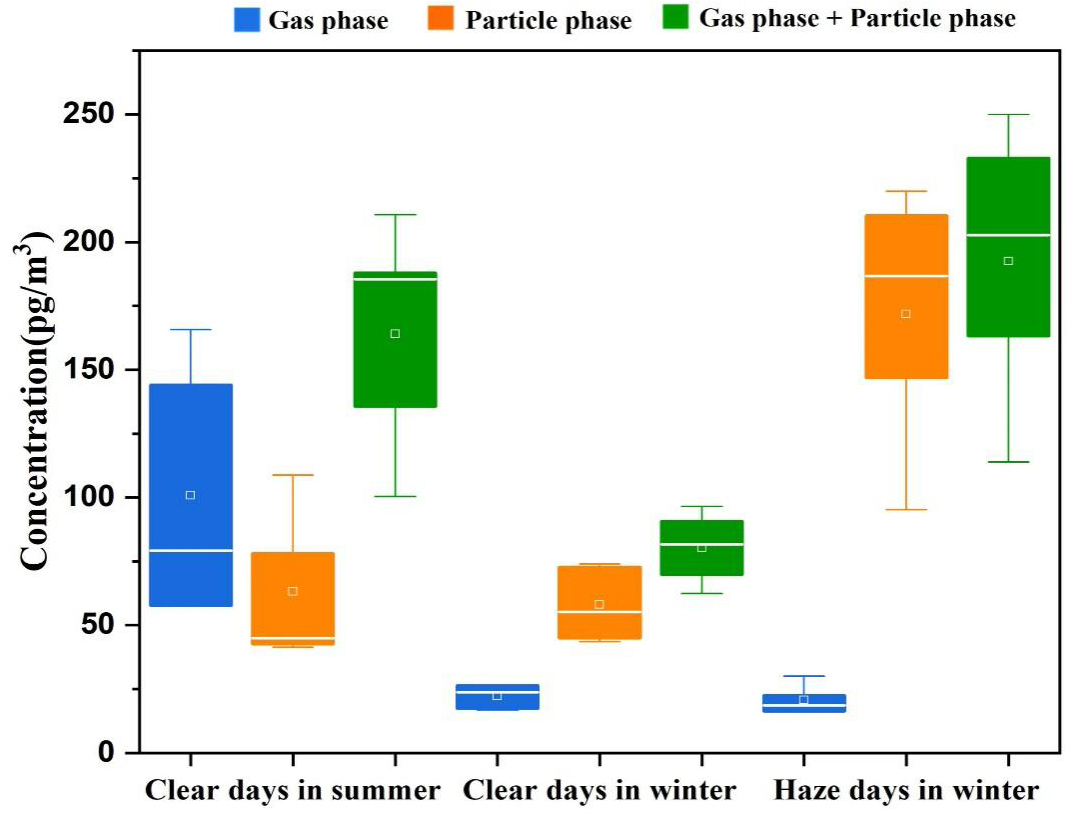 Figure 1. The concentrations of the ∑16BFRs in the three weather types.

Variations in BFRs with TSP in the different weather conditions

Gas/particle partitioning of BFRs in the three weather conditions 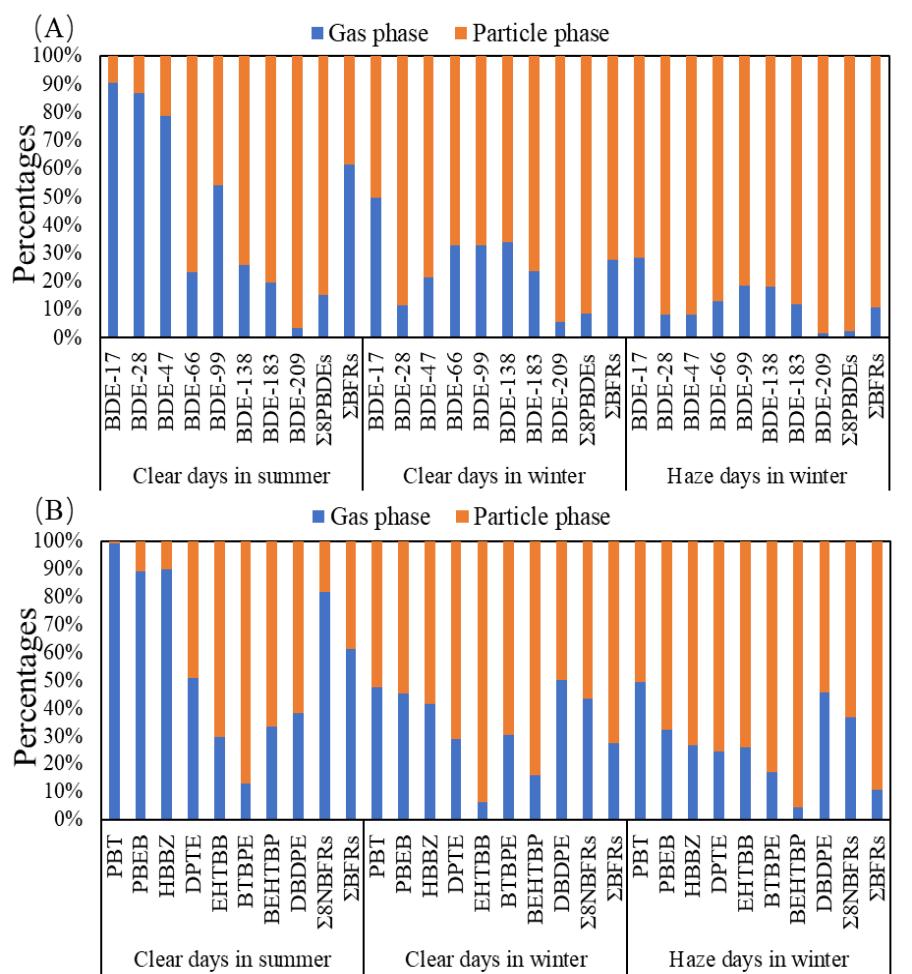 Figure 2. The distribution of the (A) 8 polybrominated diphenyl ethers (PBDEs) and (B) 8 novel brominated flame retardants (NBFRs) between the particle phase and the gas phase.

We investigated the gas/particle partitioning of BFRs in the three weather types, and compared them with the predictions of the equilibrium state model (Harner-Bidleman model) and the steady state model The Li-Ma-Yang model divided the gas/particle partition into three log KOA regions, namely the equilibrium domain (log KOA < 11.4), non-equilibrium domain (11.4 ≤ log KOA ≤ 12.5), and the maximum partition domain (log KOA > 12.5). The accuracy of the model predictions was evaluated with reference to an acceptable deviation range (ADR), which was defined as ± 1 order of magnitude of the predicting model (for detailed percentages, see Supplementary Table 5). 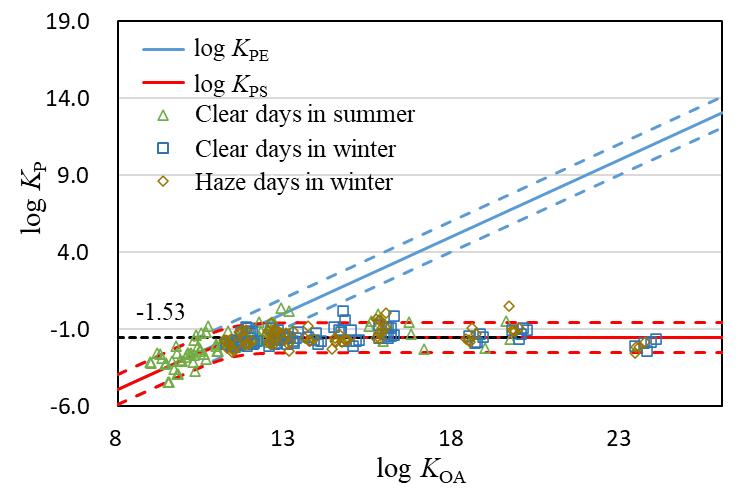 Figure 3. The differences in the gas/particle partitioning of brominated flame retardants (BFRs) in the three weather types and the predictions from the equilibrium state model and the steady state model.

Variation in the human intake of BFRs in different weather conditions 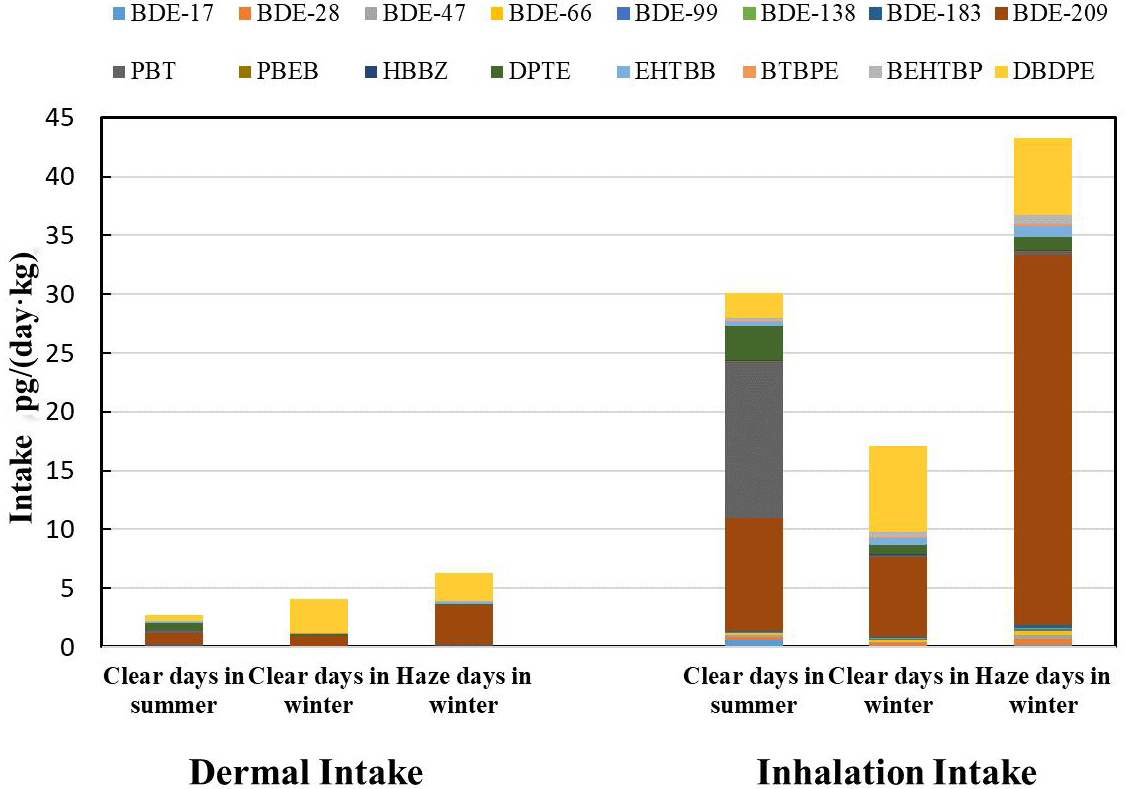 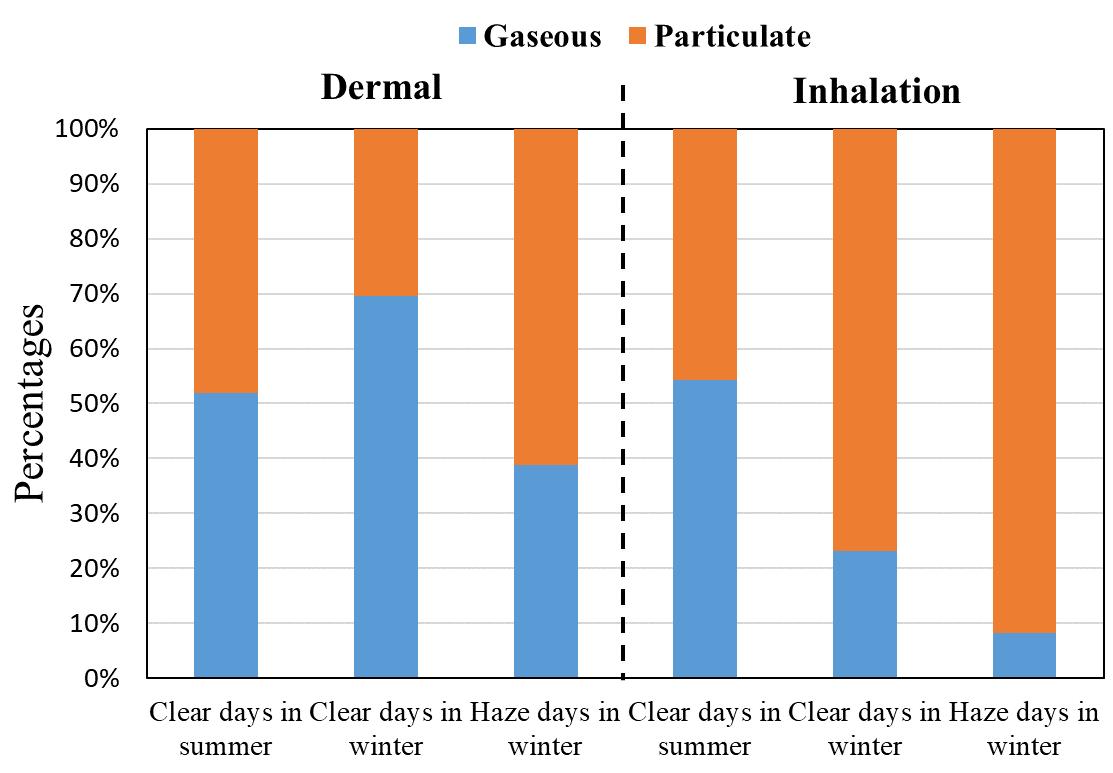 Figure 5. Contributions of gaseous and particulate brominated flame retardants (BFRs) to dermal intake and inhalation intake of the 16 BFRs.

The differences in the human intakes of atmospheric BFRs in the three weather conditions may be attributed to, among other factors, the different intake pathways (dermal and inhalation) and the degree of exposure. The dermal intake and inhalation intake of atmospheric BFRs result from different exposure mechanisms. BFRs taken in by inhalation may enter the human respiratory system directly when an individual breathes, such that the intake doses of both gaseous and particulate BFRs vary with their atmospheric concentrations. Dermal exposure involves two main processes, where (1) particulate and gaseous chemicals are ad/absorbed by surface skin; and (2) BFRs on the surface skin permeate into the human body through the dermal. The ad/absorption fluxes of particulate and gaseous BFRs were different, and the fluxes for gaseous BFRs were much greater than the fluxes of particulate BFRs, depending on the particle size. However, the permeation process varied by chemical, and tended to increase with the molecular weight. These differences between dermal exposure and inhalation exposure meant that individual BFRs with high molecular weights, especially gaseous individuals, entered the human body more easily than those with low molecular weights. As such, the high residual levels of PBT experienced on clear days in summer would only contribute noticeably to the inhalation intake but not the dermal intake.

Behavior habits also affect human exposure to atmospheric BFRs. The inhalation intake of atmospheric BFRs was noticeably higher than the dermal intake in the three weather conditions; thus, residents who wear face masks effectively reduce the exposure risk to atmospheric BFRs via inhalation. The dermal intakes of BFRs were calculated from the dermal areas of the hand and head only. However, people might expose their arms and legs to the air in summer, thereby increasing the exposure area, or wear hats, gloves, and masks in winter, which decreases the exposure area, meaning that people with different habits will have different BFR intakes.

All authors read and approved the final manuscript.

The authors do not have permission to share data. 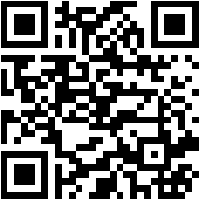