A One Health perspective on water contaminants

© The Author(s) 2022. Open Access This article is licensed under a Creative Commons Attribution 4.0 International License (https://creativecommons.org/licenses/by/4.0/), which permits unrestricted use, sharing, adaptation, distribution and reproduction in any medium or format, for any purpose, even commercially, as long as you give appropriate credit to the original author(s) and the source, provide a link to the Creative Commons license, and indicate if changes were made.

One Health is a transdisciplinary approach considering human, animal, and environmental health, and is highly relevant to water management. The growing pressure of anthropogenic activities is leading to water contamination with biological, chemical, and physical contaminants. For example, pathogens may result from fecal contamination due to poor sanitation or livestock waste leachate, agrochemicals from intensive agricultural practices, sediments from soil erosion, or microplastics from a wide range of anthropogenic activities. These activities can have widespread impacts, as exemplified by nitrates leaching from agricultural fields to surface and drinking waters, which can impact human health (e.g., methemoglobinemia), animal health (e.g., abortions and hypoxia), and environmental health (e.g., eutrophication). Recommendations include an integrated One Health approach to water contamination prevention: (i) respect for sociocultural practices; (ii) improved land management; (iii) improved infrastructures for water and wastewater management; (iv) surveillance of water bodies; (v) improved agricultural practices; and (vi) prevention through environmental management systems. One Health is a transdisciplinary approach that considers the relationship between three pillars: humans, animals, and the environment. Water is an essential resource for human and animal survival, and its cycle depends on the environment. For instance, leveled by the highest demand group (lactating women undertaking moderate activity at moderately high temperatures), the minimum daily water requirement is estimated at 5.3 L person-1 day-1 [1], and the daily consumption of 7.9 million people is More water is needed considering other daily activities (e.g., cooking, hygiene) and food production through agriculture, which accounts for 70% of current water use and contamination with fertilizers, pesticides, and livestock effluents[2]. Despite the growing demand, water resources are becoming scarcer, exacerbated by climate change and contamination[3]. Water contamination is a serious problem, with 22% of surface water bodies and 28% of groundwater in the European Union being significantly affected by diffuse pollution from agriculture[4]. Contamination can include biological, chemical, or physical contaminants that can produce or affect multiple Earth systems [Figure 1]. Therefore, the objective of this work is to introduce transdisciplinary management of contamination of water resources under the One Health approach. 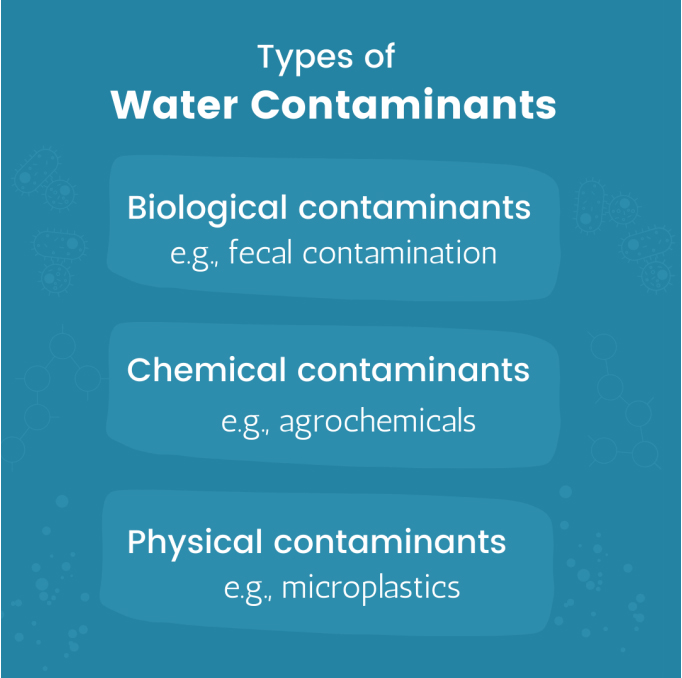 While organisms naturally exist in aquatic systems, biological contamination includes anthropogenic disruptions that lead to the introduction or excess of certain organisms, including pathogens. Fecal contamination is one of the most important sources of biological contamination of water bodies. Transmission of orofecal pathogens may be water-based, person-to-person, or foodborne[5]. Fecal contamination from the human population may originate from poor sanitation practices, the release or overflow of untreated wastewater, or insufficient wastewater treatment. Deficient infrastructure is a risk factor, for example, by enabling vectors breeding in poorly drained waters or facilitating pathogen contamination to spill into water distribution networks[6]. For instance, 2.5 billion people still lack access to sanitation[7] and 494 million practice open defecation[8]. Contamination could also originate from livestock or wildlife waste, having a zoonotic nature. Diarrhea caused by Rotavirus and Escherichia coli is spread by feces-contaminated water, resulting in an annual childhood morbidity of 1.7 billion and a mortality of 0.5 million[7]. Therefore, adequate management of (human and animal) fecal contamination and implementation of WASH principles (water, sanitation, hygiene) are required. However, adequate management may also be dependent on sociocultural factors. For instance, water boiling to reduce biological risk depends on cultural practices, traditions, and education, in addition to politics and available infrastructure[6]. Poor sanitation may also facilitate horizontal gene transfer between different species of microorganisms, promoting the formation of reservoirs of antimicrobial resistance in surface waters[9]. Besides waterborne infections from pathogens in the water and water-washed infections preventable by hygiene, there are water-based infections associated with parasite lifecycles in water, and water-related insect vectors transmitted by water insects[10]. For instance, a survey in Ethiopia identified a higher risk of malaria in living areas near stagnant water (< 1 km) - an Anopheles mosquito breeding site[11]. Fasciolosis is usually transmitted through the consumption of contaminated water or aquatic salads (e.g., watercress) and is caused by foodborne zoonotic parasites occurring near water bodies[12]. Thus, parasite and vector control programs should be a part of an integrated management strategy for water bodies under an ecological approach to public health. Surveillance of human and animal pathogens through water bodies can also be conducted under a One Health approach[10]. For instance, trends of COVID-19 infections in a population served by a wastewater treatment plant can be monitored based on the concentration of the agent, SARS-CoV-2, in sewage[13]. While water and wastewater treatment methods (e.g., chlorination) seem effective in inactivating SARS-CoV-2[14], the release of contaminated untreated wastewater could establish wildlife reservoirs (i.e., the survival of the pathogen in wild animals)[15]. Similarly, the hepatitis A virus could be detected in environmental water samples in Brazil, possibly related to the release of sewage secondary to poor sanitary conditions[16].

While water treatment is mainly focused on microbiological parameters, chemical exposure is increasing based on drinking water consumption[17]. These main chemicals include ammonia, arsenic, barium, boron, chlorine, lead, mercury, nickel, and nitrates[18]. The lifetime exposure to low doses of complex mixtures is called the exposome, which may have long-term health consequences. Agriculture remains the main source of chemical contamination (e.g., agrochemicals, veterinary drugs), despite the release of high amounts of untreated urban wastewater (estimated at 80% globally) and industrial compounds[19]. In France, water resources near intensive livestock areas were contaminated not only by microorganisms but also by veterinary drugs, which were excreted and then released via leaching, runoff, and erosion directly from the feces and urine of animals or through the application of animal manure as a fertilizer[20]. Similarly, human pharmaceuticals and personal care products may survive wastewater treatment and be released into watercourses. This is the case of estrogenic compounds used as contraceptives, which may be released into the environment, interfering with the organism’s reproduction (e.g., feminization, fecundity)[21]. The release of nitrates, used as fertilizers in agriculture, may induce: (i) eutrophication with the rapid growth of algae consuming O2 and releasing CO2, creating an inhospitable environment for other aquatic organisms[22]; (ii) the blue baby syndrome, leading to methemoglobinemia with cyanosis, due to the conversion of hemoglobin Fe2+ to Fe3+ incapable of carrying O2[23]; and (iii) abortion in ruminants from cortisol release during hypoxic stress secondary to nitrate poisoning[24]. Persistent poly- and perfluoroalkyl substances (PFAS) from industrial sources are also present in rainwater and water resources worldwide, with drinking water presenting a major pathway of exposure for populations near contaminated sites (generally neighboring manufacturing plants), possibly resulting in reduced immune responses[25,26]. Water may also become contaminated during distribution (e.g., lead released from lead pipes[27]) or packaging (e.g., bisphenol A in food contact materials, including water bottles[28]). Contamination may be a truly interdisciplinary problem, as exemplified by populations in the Amazon suffering from mercury contamination after “slash-and-burn” deforestation to clear land for agriculture, which released methylmercury from highly enriched soils, contaminating rivers, and therefore bioconcentrating in carnivorous fish species, which were consumed by local communities[29].

Physical contaminants consist of an increase in suspended particulate matter of natural origin or the release of human-made particulates into the water. Thermal pollution (e.g., the release of warm water from power plants) and light pollution may also be considered physical contaminants. Inorganic particles (e.g., minerals) increase water turbidity, change water dynamics and interfere with human-made structures (e.g., dams) due to sedimentation, increase infrastructures’ wear and tear (e.g., pumps), and deplete soils from which they originate (i.e., soil erosion), whereas organic particles can lead to high biological oxygen demand resulting in hypoxia[30]. Sediment loading (i.e., sediment transported through a stream) may also induce adverse effects on ecosystems, such as changes to ecological functioning, trophic structure, the composition of biotic assemblages, and reduced biological diversity and productivity[31]. Similarly, microplastics are anthropogenic derived particles that are frequently found in aquatic environments. Microplastics are environmental contaminants consisting of plastic particles < 5 mm derived from intentional industrial production (primary microplastics) or degradation and fragmentation of plastics under environmental conditions (secondary microplastics)[32]. Rivers play an important role in the transport of plastics from land to sea, with the top 20 polluting rivers responsible for an estimate of 67% of emissions reaching the oceans, where they accumulate[33]. Microplastics are great candidates for a One Health approach since they originate from multiple anthropogenic activities and can interfere with abiotic properties and ecosystem functioning, ultimately resulting in adverse effects on animal and human health[34]. Moreover, all kinds of suspended particles can adsorb and desorb chemical contaminants in the water, modulating their fate[30].

A ONE HEALTH APPROACH TO MANAGING WATER CONTAMINANTS

As discussed previously, human activities are the major contributors to water contaminants, although some natural sources can also be present (e.g., volcanoes). Unsustainable anthropogenic activities, such as inadequate practices of farming or sanitation, may result in local adverse effects on organisms or environmental processes[35]. Therefore, disease outbreaks in both animals and humans living in proximity can indicate contamination of a common water source[36], with animals often showing signs earlier and thus acting as sentinels[37]. Similarly, solutions require integrated strategies or technologies[38]. Therefore, impacts and responses to water contaminants are multidisciplinary, thus requiring the One Health perspective to fully promote sustainable water stewardship by applying a systems dynamic approach [Figure 2]. 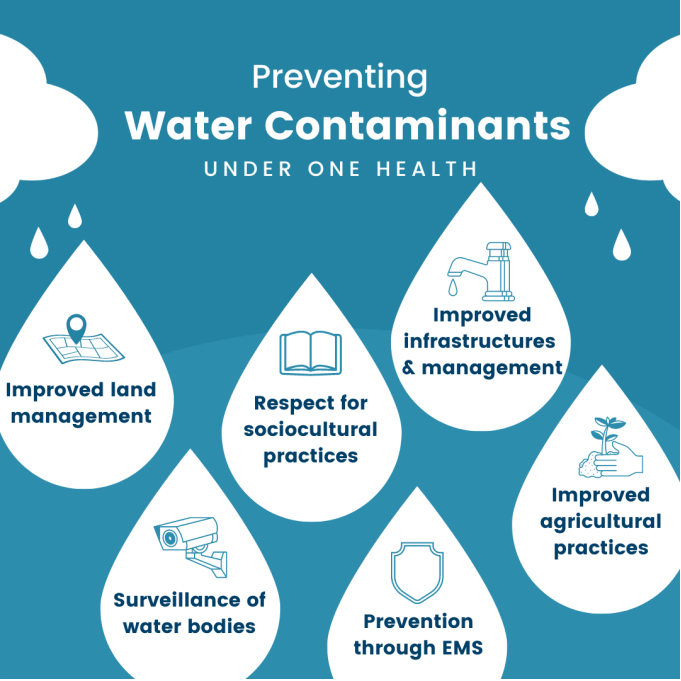 In addition to adverse effects on biological systems, scarcity of potable water is already a limiting factor for business[3], having a preventable economic cost. For instance, there has been an increasing trend of droughts in China, especially since the 1990s[39]. Emerging technologies may provide mitigation measures for the increasing stress on water resources. Reclaimed greywater reuse (i.e., wastewater without fecal contamination), such as in irrigation or solar panel washing, could provide important drinking water savings[40]. Greywater or treated wastewater could also be used to artificially replenish aquifers[41]. On the other hand, improvements in wastewater treatment may reduce the release of contaminants into the environment. Advanced oxidation processes (AOPs) rely on the production of reactive hydroxyl radicals capable of degrading contaminants and remaining organic matter, effectively removing them from treated wastewater[42]. On the other hand, desalination plants may increase the availability of freshwater but imply a high energy cost and produce brine, which has high environmental impacts[43].

Considering water resources under the One Health approach, the following topics must be considered concurrently to prevent or mitigate water contamination:

● Respect for sociocultural practices when implementing new water management measures (e.g., boiling water, fish consumption), for instance, through the use of participatory approaches, and expanding the use of WASH (water, sanitation, hygiene) principles, including access to soap;

● Improve land management which may reduce leachates from feces and wastes (e.g., having a buffer zone between livestock areas and water bodies), reduce contact of populations with waterborne parasites and disease vectors, and prevent soil erosion;

● Use water bodies or effluents in the surveillance of populations and related environmental contaminants (e.g., pathogens);

● Improve agricultural practices, ideally promoting sustainable use of resources and limiting the release of water contaminants;

● Prevent contamination by considering the impact of anthropogenic interventions and activities on water bodies, even indirectly, based on environmental management systems’ principles.

In conclusion, water contaminants are a growing concern in today’s world due to growing anthropogenic activities. Therefore, a transdisciplinary approach is required for appropriate risk assessment and risk management of water contamination, using an integrative and cost-effective One Health approach.

The author declared that there are no conflicts of interest. 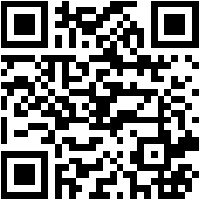