Conclusion: Our preliminary report revealed an expected greater shrinkage of FTSGs compared with STSGs. Furthermore, in a limited number of specimens, the shape of the skin graft seemed to affect the primary contraction of the STSGs.

Wound contraction is a normal physiological phenomenon reducing the area of a skin defect and therefore expediting its closure. This contraction is based on scar contraction and myofibroblast activity; all originate from granulation tissue that develops during the 1st week of the inflammatory process, part of the normal wound-healing course. The application of skin grafts to fresh skin defects has been proven to reduce wound contraction and hypertrophic scarring compared with full-thickness wounds that have been left to granulate and heal by secondary intention alone.[1,2] However, skin grafts can also contract, resulting in a compromised esthetic outcome and restricted mobility of the joints involved.

Skin grafting is a major element of reconstructive surgery. It is, therefore, important that every aspect of its practice is thoroughly investigated and evaluated. Primary contraction was first described and assessed by Davis and Kitlowski in 1931.[3] The authors of that pioneering study used human specimens, a practice that has some limitations regarding the number, size and shape of skin grafts. Furthermore, although more than 80 years have elapsed, there have not been any studies that further looked further into the development and cause of primary contraction. In this preliminary in vivo porcine study, we assessed the degree of primary skin graft contraction and investigated whether the shape of skin grafts affects the degree of contraction.

The study was conducted at an accredited animal research facility (CRO, Lahav Research Institute, Lahav, Israel) following national and institutional guidelines for the care and use of laboratory animals.[8] The animals were anesthetized female domestic pigs (Susscrofa), weighing approximately 30 kg. The study was approved by the Institutional Animal Care and Use Committee.

The study consisted of two parts. In the first part, we compared the contraction of FTSGs and STSGs. Four animals participated in the study, and a total of 67 specimens of skin grafts were harvested from the back of the pigs, 41 and 26 of FTSGs and STSGs, respectively.

For the study of the FTSG contraction, circles of 4 cm diameter were drawn with a permanent marker on the skin of each pig [Figure 1]. The area of the circles marked was calculated using the formula: area = πr2, where r = radius of the circle and π = 3.14, resulting in the area value of 12.56 cm2. The skin was excised with a No. 15-blade in a circle shape and meticulously defatted. The FTSGs were placed on a flat surface 15 min after skin graft harvesting to facilitate complete primary contraction; their diameter was measured in 3 axes (with an axis-to-axis angle of 120°) and the average diameter was used to calculate the radius of the circle [Figure 1]. The mean value of the diameter was computed, and the surface was again calculated using the formula: area = πr2. 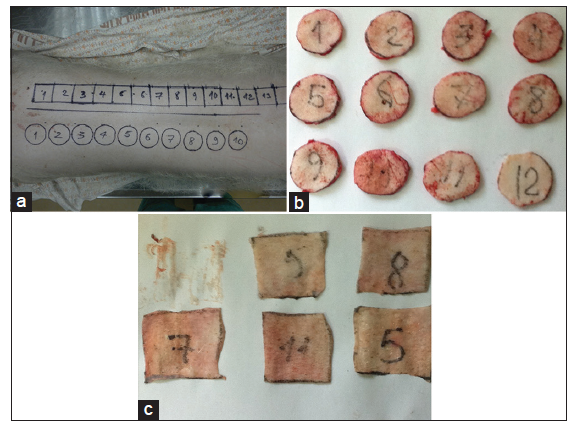 For the study of STSG contraction, a rectangle stripe of 4 cm height and 40 cm width was drawn with a permanent marker on the pig. Additional lines were drawn vertically to produce 10 squares of equal 4 cm sides [Figure 1]. The area of each square was calculated using the formula: area = s2, where s = side of the square and the initial area value of 16 cm2 were recorded. All STSGs were harvested with a dermatome adjusted to 0.014 inch skin thickness, corresponding to moderate to thick skin grafts. The stripe was cut into squares according to our drawings, and the grafts were placed on a flat surface and left there for 15 min before measuring [Figure 1]. Due to the primary contraction, the initial squares changed into rectangles. Each side of the contracted STSGs was, therefore, measured, and the surface was calculated using the formula: area = h × w, where h = height and w = width.

First part of the study: comparison between contraction of FTSGs and STSGs

Second part of the study: evaluation of the role of shape of skin graft in primary skin contraction

Skin graft contraction is a common problem resulting in significant morbidity with restriction of joint mobility and cosmetic complications, often requiring multiple corrective operations. Secondary contraction has received the most research emphasis due to the fact that it is clinically more important than primary contraction. Secondary contraction often results in severe effects on body function or patient appearance. Studies on the cellular activity underlying skin graft contraction support a most probable theory that the contraction occurs secondary to the differentiation of fibroblasts to myofibroblasts with expression of α-actin filament bundles which exert an inward pull on the wounds edges.[1,9,10] The myofibroblasts have contractile properties similar to smooth muscle cells and organize their actin cytoskeleton along the lines of greatest skin tension.[1,11] As the myofibroblasts are adherent both to one another and to the fibronectin-rich wound bed, the entire mass of granulation tissue contracts.[1] Keratinocytes may also play a distinct role at the early stages of contraction, since studies have shown that keratinocytes are capable of inducing collagen gel contraction in vitro.[12-15] The actinfilament organization within keratinocytes at the wound margin appears to be responsible for the epidermal “purse-string phenomenon”.[14] In addition, cytokines and growth factors such as ransforming growth factor-β1, insulin-like growth factor and fibroblast growth factors have also been found to play a major role in secondary contraction.[15] Unlike secondary contracture, which is the result of a prolonged biological process, primary skin graft contraction is mainly an immediate physical change in graft dimensions mediated by the tough fibrous layer of the dermis, which is primarily composed of collagens, glycosaminoglycans and elastins.

Davis and Kitlowski[3] were the first to study the primary contraction of skin grafts. The authors used skin grafts from patients of various age and donor sites and recorded the percentage of skin contracture in relation to the thickness of the graft. Their results showed that, regarding the “whole thickness skin grafts” (FTSGs), the mean amount of shrinkage was 43.6% with little variations according to the donor site. The “half thickness skin grafts” (mid thickness split thickness STSGs) were presented with a mean shrinkage of 24.86% and the “thick Ollier-Thiersch grafts” (small grafts with thinner periphery and thicker-centered STSGs) with a mean shrinkage of 11.26% and 11.95% for abdominal and thigh donor sites, respectively. The very thin “true Ollier-Thiersch grafts” (thin thickness STSGs) demonstrated a greatly reduced primary contraction of 1.24%.[3] According to the authors, the shrinkage observed was in direct relation to the amount of dermis included in the harvested skin grafts. Using specimens from humans, however, had the limitation that the grafts and their donor sites could not be standardized according to the site, size and shape of the examined grafts. Homogeneity of the samples was further compromised due to variables like gender and age of the studied subjects.

Other authors had previously referred to the etiology of skin graft contraction, coming to the conclusion that the network of elastic fibers of the dermis is responsible for its ability to stretch under the movement of the underlying tissues, as well as for the shrinkage of the skin graft.[16] In Ragnell’s study on the secondary contracting tendency of free skin grafts, the elasticity of circular pieces of rabbit skin was estimated using a manometer device. The author concluded that rabbit skin presented uniform elasticity, but no further studies on primary skin graft contraction were performed.[16]

Skin is a very complex, integrated, dynamic organ that has many functions. In mammals, the primary functions of the skin include insulation and temperature regulation, although the role of the skin as an endocrine organ and a critical component of the immune system cannot be ignored.[17] Species differences in all of these functions may dramatically alter skin behavior regarding its mechanical characteristics or drug absorption. When barrier, pelage, vascular, endocrine and immunological properties are considered en masse, pigskin is very similar to human skin.[17] Pigskin resembles human skin in both structure and function, having similar sparse hair coating, a relatively thick epidermis, similar turnover kinetics, lipid composition, carbohydrate biochemistry, lipid biophysical properties, and - what is most relevant to the present study - a similar arrangement of dermal collagen and elastic fibers.[9,18] All these similarities establish the pig to be an essential model in cutaneous research. Since in vivo experiments on primary skin grafts would require grafts of different shapes, minimum dimensions of 2 or 3 cm, symmetrical locations of the grafts and suitable controls, human experimental material is not available.

In our study, the skin grafts were harvested from pigs, resulting in standardized specimens in terms of size, shape and location of the donor site and at the same time, skin behavior close to that of human skin. The substantial differences between our results and the results reported by Davis and Kitlowski,[3] however, point out the different primary contraction behavior of human and porcine skin. Although similar in many ways, different thicknesses and possibly different elastic properties between human and porcine skin may lead to different contraction behaviors of skin grafts. Furthermore, the rate of primary skin contraction probably depends on donor site characteristics. Clinical experience shows that skin harvested from the backs of patients presents limited contraction when compared with skin grafts from other sites. Furthermore, there was one specimen from the STSG group of the first part of the study that surprisingly showed 0% shrinkage. Since 0% primary skin contraction before is rather unusual, we believe that this behavior was related to a specific donor site and will be further investigated in upcoming studies. Another possible reason for such a discrepancy in skin graft shrinkage could be technical difficulties: harvesting very thin skin grafts with small amounts of dermismay have been responsible for graft contraction.

The mean percentage of primary skin graft contraction has found to be different in the two parts of the study, with mean values for both FTSG and STSG contraction showing inconsistencies between the study series. These unexpected differences were probably due to the small number of specimens in the second part, which did not yield statistically significant results. Furthermore, the use of only one animal in the second part of the study may have magnified the role of biological variation, a matter that will be further investigated in future larger studies.

Mean percentage of primary contraction for square STSGs was found to be 3.8 times higher than round STSGs (4.2% and 11% for square and circular STSGs, respectively). The recorded difference for the FTSGs, however, is not that prodigious. Since this is only a preliminary report with a small number of specimens involved, we believe that future studies will help to clarify the issue.

Limitations regarding human specimens necessitate the use of animal models; further studies are required in order to investigate whether pigskin is suitable for the study of primary graft contraction. The study cohort is limited and a larger series for all arms is needed for a better understanding of these phenomena.

Skin grafts are widely used and any information regarding their characteristics is valuable. Our preliminary report reveals an expected increased shrinkage of FTSGs compared to STSGs and in a limited number of specimens, the shape of the skin graft seems to affect primary contraction of the STSGs. Although it is difficult to dramatically change the shape of skin grafts, if this feature is ultimately found to alter primary contraction, the results could possibly be applied in clinical practice. 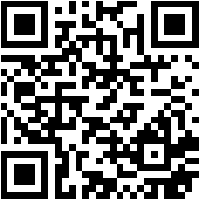